The various calls for the disbandment of the Special Anti-Robbery Squad (SARS) have entered its fourth day.

Protesting youths on Saturday continued their #EndSARS in Abuja after President Muhammadu Buhari on Friday appealed for calm from Nigerians.

The youths are angry at the brutality and extortion suffered at the hands of operatives of the Special Anti-Robbery Squad (SARS).

Most of those who protested today were seen carrying placards and chanting “EndSARS” as they marched through the streets of Abuja’s Central Area peacefully.

In recent times, the activities of the police unit have come under scrutiny and several members of the squad have been found guilty of using their position of authority to trample on the rights of citizens, especially the youths.

President Buhari had asked the Inspector General of Police Mohammed Adamu to address the concerns of Nigerians following the outcry of youths for an end in the unit. 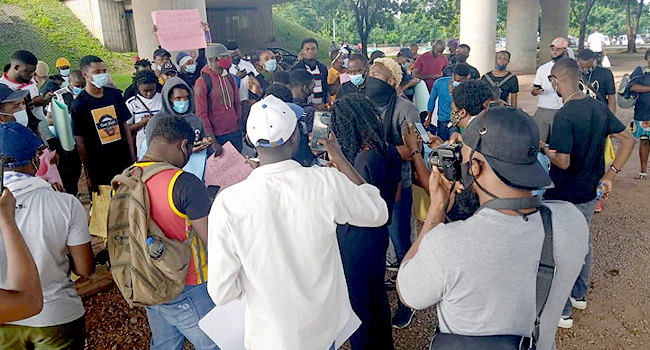 “The IG already has my firm instructions to conclusively address the concerns of Nigerians regarding these excesses, & ensure erring personnel are brought to justice.

“I appeal for patience and calm, even as Nigerians freely exercise their right to peacefully make their views known.

“I met again with the IGP tonight. Our determination to reform the police should never be in doubt. I am being briefed regularly on the reform efforts ongoing to end police brutality and unethical conduct and ensure that the Police are fully accountable to the people” the President added.